2014 and 2015 have been a relatively less critically acclaimed year for Bollywood movies. However, some movies clearly stood out as out of league experiments that tasted critical success in recent times.

Lets have a look at some of the best mainstream Bollywood movies in the recent times: 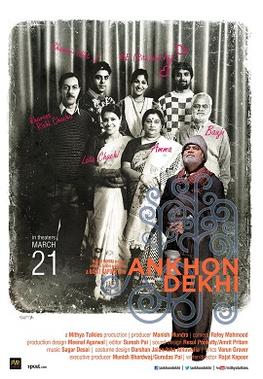 Aankhon Dekhi, a not so well known movie due to its criminally un-promotable nature, is indeed a treat to watch. The movie that goes to prove that life can be much more simpler and smooth if one lives on his/her terms, is a savory dish of delectable comedy that revolves around its protagonist, Sanjay Mishra(Bauji). It is a near perfect depiction of balanced emotions of an ageing person and people around him. No doubt the movie won many awards under critics category.

Highway, like any of Imtiaz Ali’s creation is a movie based out of a journey experience. An adaptation of Zee TV’s acclaimed serial Rishtey, the movie turned out to exceed expectations. ‘An abduction turned love’ story of a bride before her wedding was taken well by critics for the performances, screenplay and mind blowing music.

Drishyam, remake of Malyalam movie, was always known to carry a good story. Coupled with performances from Ajay Devgan and Tabu, this movie was engaging to the core. Story of a movie buff dealing with an unpleasing and uninvited situation could never have been so engrossing. No doubt it received rave reviews from critics.

Pyaar ka punchnama 2, a much awaited sequence to Pyaar ka punchnama, did the unconventional and still succeeded. It kept the same plot as its predecessor but still courtesy Luv Ranjan’s mass appealing movie making, it still did better. Movie of 3 bachelors turned love birds saw Liquid being replaced by Chauka. And like its previous version, it was Liquid turned Chuka and Kartik’s outburst that stood out. Chauka played by Sunny Singh, the child actor in Dekh bhai Dekh was widely appreciated for his role.

Queen, the story of a rejected girl who turned down odds against her to move into a frame of un-penetrable confidence, had the critic fraternity appreciate Kangana’s flawless acting skills.

Baby, an inapt name for the otherwise fast paced thriller movie, is one of its kind thriller seen in Bollywood cinema of late. Movie of a small undercover operation called baby to nail terrorists was taken very well by viewers and in the process was liked by critics as well.

Tanu weds manu 2, one of the finest comic movie of recent times stood up against Pk for this list. While PK was a different presentation of ‘Oh My god’ plot, lose out on its originality.  Tanu weds manu 2 far exceeded its predecessor on its comic element mainly through its well known character ‘Pappi’. The comic timing coupled with the unrelentless fun in first half goes in its favor.

Pizza, remake of a Tamil movie, is one of the fee horror movies in the decade that has been taken well (above average) by critics. Nicely crafted, the movie has its flaws but by far the best horror movie in recent times.

One interesting point is that most of these movies are either remake or sequels or adaptations. Noticed before?

What do you think? Thoughts or criticism both welcome.

What is it like to see a dead mother alive? Nothing can explain this better than the epic scene